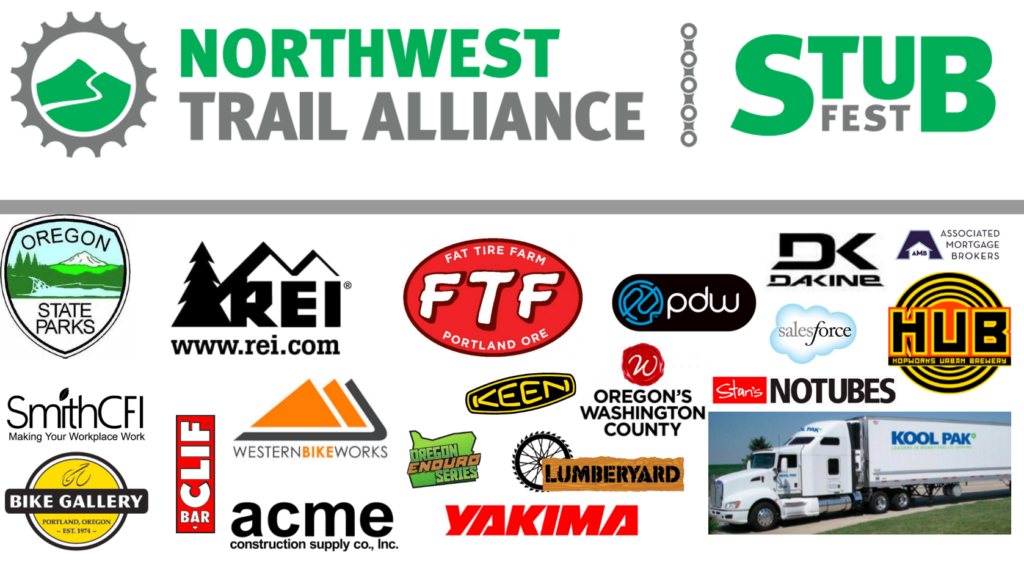 Our 2nd annual Stub Fest event was a lot of fun for all that came to help celebrate the goodness that is Stub and give back some sweat equity.   This event capped the 2015-2016 trail build season at Stub Stewart State Park with about 100 participants who enjoyed free camping, BBQ and brews, and helping work on trails built by mountain bikers for mountain bikers.  1,145 volunteer hours were logged!  Those who camped until Sunday also got special VIP treatment from REI with ultimate camp s’mores, ultimate camp coffee, sunrise yoga, and organized group rides.

“It was amazing to see how much got done in such a short amount of time!  Let’s do this again NEXT year!   One million trail karma points for everyone that helped!” — Joe Rykowski

SO much thanks to give!

MUCH thanks to Ted Dodd for leader as event organizer.  There’s a mind boggling number of things (which often happen behind the scenes months in advance) to orchestrate a successful event like this one.  Ted juggled it all skillfully and with tact.  He’s created a format for an epic annual event which NWTA does intend to repeat every year as part of State Parks Day at Stub Stewart State Park.

There’s also many crew leaders and event volunteers who helped pull off this event.   Ted definitely had minions to take care of the many tasks involved from purchasing food and preparing it to laminating “no parking” signs and getting them placed, setting up the Hilltop area, handling volunteer check-ins, and clean up afterwards.

Special shout out to all of sponsors who contributed $$ and/or give away items to help reward the volunteers for their time!

Lumberyard even hooked us up with their adventure bus to shuttle the handful of volunteers who didn’t come prepared to ride to work sites… so they got a lift to the mountain bike area trailhead to shorten their hike a bit.

Things got rolling Friday evening with condensed version of the IMBA Trail Builders School.   The expert advice of Jason Wells, a professional trail builder with IMBA Trail Solutions, was gobbled up like the tasty burgers and Hopworks beer that was served up at the same time.   Crew leaders had opportunity to get any last minute questions answered for their specific work projects, then headed out on an optional night ride or went back to their camp site. There were 10 crews with average of 10 people per team out on various sites accomplishing tasks to improve the mountain biking area trails.  Focus was on existing trails in the Stub Stewart State Park mountain biking area to keep them in primo shape for summer season as well as making some enhancements to make them even better. All tools had been staged ahead of time far out in the woods, so everyone got to pedal out with crew to a site, pick up tools, and whip the trail into better shape.   No tool shortages or Hunger Games style raids on other crews reported, so we’ll call that a win!   Seriously, volunteer crews had specific tasks that the leaders knew needed to get done (see event project map below) as well as some secondary goals if time allowed.  We were able to accomplish those planned main goals for the day as well as get some of the bonus tasks done or at least started. After Work BBQ and Raffle

While crews were out working, the grills got fired up back at Hilltop Day Use area and volunteers got the feast set up so food was ready when people started coming back from working on trails.   There was time for relaxing under canopy tents over picnic tables and catching up with like minded trail builders while the burgers and dogs grilled.

There were kids games, an REI hospitality tent, Lumberyard wooden skill course, and ice cream served by the Friends of Stub Stewart State Park… to round out the whole “festival” feel of this massive work party (which was so much more than a typical work party).

This is a once a year extravaganza and if ya missed it, definitely block out the first weekend in June 2017 for NEXT YEAR!

$960 was raised (towards estimated $5,000) for trail design of the South Stub Expansion

40+ kids were at Stub Fest (not included in above total)

28% of the attendees had not ridden at Stub Stewart before 50% of the volunteers were new to working on trails

40% of the attendee were new to mountain biking

Pick up / Setup / Return of the Wood Skill Course –

Tool staging and pick up –

Bike Gallery provided the gift certificates for all the people who attended the trail building class and the incentive for donating to the trail design work for the South Stub Expansion Project.

Dakine, Oregon Enduro Series, and Stans donated the SWAG for the volunteer raffle

HUB Brewing donated the beer for the three day event

Watch for future trail projects and updates about the South Stub Expansion Project.

Have a great photo?  Please email it to me.

We will be sharing photos and a video are at later date once assembled.  Watch the newsletter and Facebook. If you are not a dues paying member please join now so we can host events like this again in the future.